This post also appeared on the Council for Advancement and Support of Education (CASE) Blog on July 7, 2015.

On Friday, June 26, the Supreme Court handed down the much-anticipated ruling granting marriage equality to same-sex couples nationwide. Soon after, the social media world was flooded with rainbow-colored content from the White House to the biggest brands. Reactions from institutions of higher education were varied, ranging from silence to inviting constituents to share their reactions using a special hashtag.

As with any current event or hot topic, it’s difficult to balance band-wagoning and genuine contributions to a conversation. Thankfully, with Supreme Court cases, we know a ruling is coming months in advance, and there’s usually plenty of time to discuss and debate a response (or responses, depending on the ruling’s outcome) ahead of time. This creates a great opportunity to prepare your topical content in advance.

For a public university like California State University, Chico, with core values that include supporting a diverse community, the ruling offered the opportunity to publicly reaffirm that value.

And, that’s exactly what we did on Facebook, Twitter, Instagram and Snapchat. On Thursday, I stopped by our Office of Diversity and Inclusion to pick up a sticker and bracelet and headed out to an iconic spot on campus with the university photographer.

Celebrating with our Wildcats around the country today! #loveislove #marriageequality pic.twitter.com/mw61sIjsWL

I wanted to focus on supporting our students and alumni rather than making a blanket political statement—and responses were overwhelmingly positive. The post did spark a few small debates on Facebook, but our community stepped in, and I did nothing but monitor 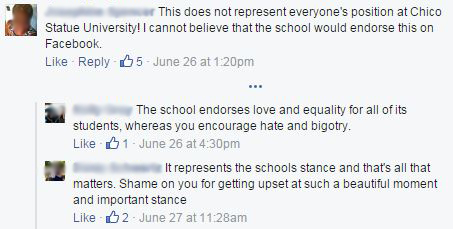 That approach worked well for my institution, but the one that seemed to be most popular with other institutions was sharing timely news stories and faculty blog posts. This is a great way for universities to show their support without overtly taking a stance—and to take advantage of trending hashtags, sharing great content widely.

At the University of Illinois at Urbana-Champaign, editorial associate for social media Meaghan Downs said the institution ultimately decided to go the news-related route to avoid the appearance of band-wagoning, explaining, “Research ultimately speaks to mission of fostering scholarship.” 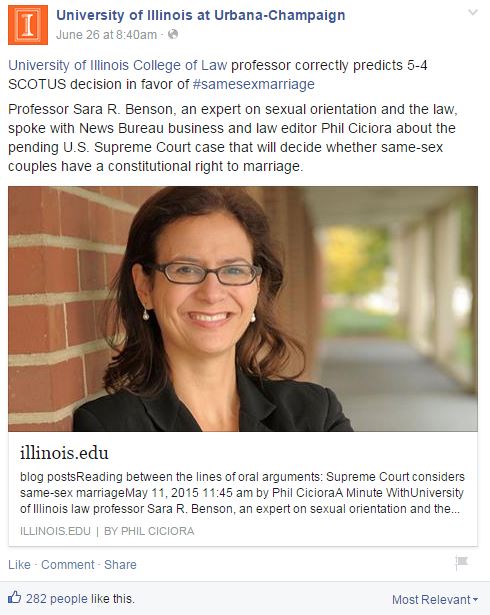 San Francisco State University used a retweet from their president and shared a related story about an alum to mark the occasion.

Northeastern University did some on-the-ground interviews and put together this fun post:

University of Vermont combined a celebratory photo with a news-y article:

And I love this messaging from Ithaca College:

How did your school post (or not) about the Supreme Court ruling, and what was its reasoning? Share examples and thought processes in the comments below.